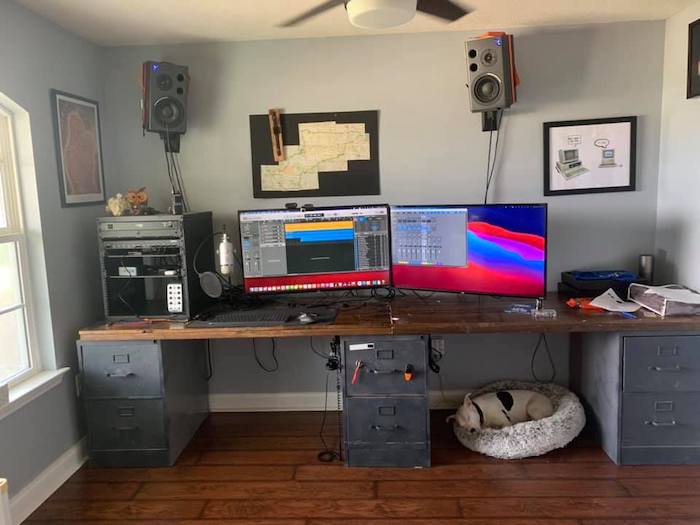 Padded Cell Studios was started back in the 90s. I was soundman for a local Oregon high school rock band called Channel 7. They played mostly original songs and wanted to record them. Since I had all of the live sound gear we had most of the equipment we needed, we were missing a For track recorder yes I’m talking about cassette tapes. I’m not sure who or how but eventually one ended up in our possession. Then we had to come up with the place to make the record or I mean tape. It just so happens that I grew up in a very large house with a very large basement on 5 acres of property. We turned my basement into the first version of padded cell studios or what would become padded cell studios.  Back then we just called it the basement. We didn’t do too bad for being a bunch of high school kids that didn’t know what the fuck we were doing at all.

After moving out of my parents house I would set up various versions of a studio in every apartment I lived in. At one point I was living down on Park Street in Madison Wisconsin in cannabis apartments lol that’s not really the name but should be. One day I was tracking some guitars and the rent a pig that patrolled the triangle where my apartment was heard,  the guitar playing and tried to tell me that it was a quiet neighborhood and I couldn’t play guitar or record in my apartment. My girlfriend at the time politely  explained to him that the Madison Wisconsin noise ordinance said that I did not need to turn my music down until 9 PM. This complete douche bag tried to tell me that my lease said otherwise well he was wrong. Instead of dealing with the bullshit I went hunting for a solution to try and soundproof my apartment without having to build a room in a room like you’re supposed to do. I came across this company that basically sold overpriced moving blankets that you hang on your wall that will deaden the sound. Do you know what they fucking work. If you are making a lot of noise in your apartment and you don’t want to get in trouble check these guys out. https://www.audimute.com . Honestly in the grand scheme of things it’s not expensive I was able to take a 10 x 12 room and basically make it so I could play music pretty much as loud as I wanted and nobody would hear it. When I purchased their sound absorption pads they were such a small company that they only had one color which was white, it made my room look like a Padded Cell like what you would find in a old school mental hospital. Thus that’s the name of the studio. I don’t use them anymore but the name stuck.

I’ve been asked many times what I used for gear. And how do I have things set up so I can access them being in a wheelchair. First of all I have a very large desk. You can see a picture of it at the top of this post. As of today I don’t have any outboard gear. The quality of the compressors and EQ inside the box as they say is as good as $100,000 worth of outboard gear at least in my opinion. The digital audio workstation I use is logic, at least that’s what I use the most. Sometimes GarageBand is required. The audio interface that I’m currently using is the

Focusrite Scarlett 2i2 3rd Gen USB. Hold on one fucking minute. I’m sitting here telling you about what “soundcard “I’m using. What’s the most important thing that you need in the studio? Speakers! Well I have been rocking a set of Alesis 2007 M1 Active 620 100W Powered Monitors these things are fucking amazing.  I guess that’s why I’ve had them for at least 15 years. If you want to know more about them you’re going to have to Google I could not find a link that I could share with you so you could go pick them up. I have definitely jumped on the bandwagon with USB microphones. Don’t get me wrong I still have the workhorses sure SM 57/58 but USB quality has gotten  amazing in the last few years. You will find a list of all the gear I use below. The iteration of the studio that I am currently in is basically built for radio broadcast/podcasting. That’s not all that I do. Yes rolling with scissors is produced in the studio but I also am a musician myself and produce all of my albums in the space as well.

Being that I am in a wheelchair yes I had a lot of a help in many different ways from a lot of people that have been in the industry as long or longer than I have to get to the point where I’m at now. Probably one of the most important is Ted Jenkins (THUMP) owner of recluse studios. A few of the other people that I have worked with to get things off the ground are Jeremy Gander (EMU) Matt Clark (FUCK FACE) and Brian Kline  I’m sure there are many more.

Here’s the list of the current equipment as of 12/18/2021 all of my gear comes from either Apple,  Amazon or Sweetwater.