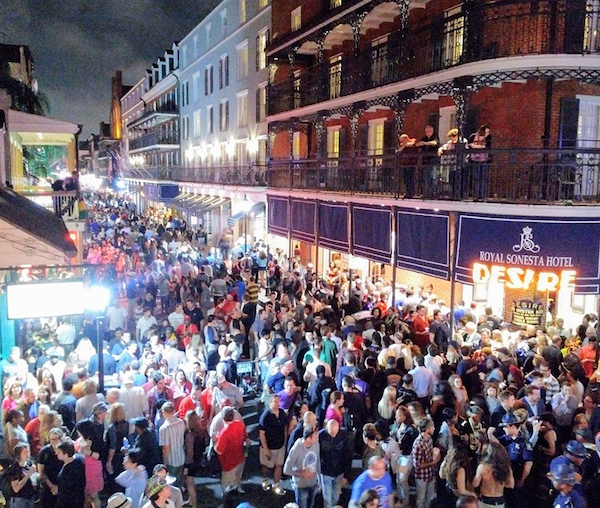 My parents always told us kids that when my baby sister, Sarah, turned 21 they would take us to New Orleans. That day finally came in 2002. On the trip were both of my parents, my two sisters and their significant others. Since I was single, I invited my buddy, Josh Mindham. When the two of us got together, you never knew what was gonna happen. This weekend would definitely not disappoint. This weekend would have a lot of points where I look back on it and go, “Holy shit! I can’t believe that happened!!”

The night before we all left, we all met up at my parents’ house, since all of us were not living at home. This is where one of the first ‘I can’t believe that happened!’ moments started. Josh and I roll into the house, and my old man handed me a pipe and said, “Take a hit…we’re on vacation.”

This was the first time that had ever happened. When you’re a teenager, you want to hide your drug use from your parents – I was never very successful at that. So, after getting significantly blunted, we all passed out and then headed to the airport in the morning. The first flight was uneventful. I think we flew to Atlanta and changed plans, getting on a plane to go to New Orleans…

If you’ve ever taken a flight to a party city on the weekend of a big holiday, think of all of the videos you’ve seen of rock stars taking over airplanes. Yep, that’s what happened – that entire flight was a party!

There were three people passing around drinks and oranges – not flight attendants, just passengers. These same three people were also passing around a Maxim magazine, and one of the girls in this group was in the magazine. Yes, before you ask, she was, “Hot! No no, no hot! No, you don’t understand hot!!!” I don’t remember much of the flight, other than drooling over the Maxim magazine model sitting across from me.

We land in New Orleans and made our way to our rental house (this was way before Airbnb was a thing). Had a couple of cocktails and smoked some of that sweet greenleaf.. Can’t talk about how we got it, lol.

I believe we all passed out for a while, because if you’ve been there, you know that Bourbon Street doesn’t really get crazy till it gets dark. I did say it was Halloween weekend, so we all dressed up and walked the few blocks to Bourbon Street. Now we all know about Mardi Gras and how freaking crazy that is; Halloween is just slightly less crazy. Now, here’s where ‘I can’t believe that happened!!’  moment number two occurs…

I don’t know how many of you out there were raised by pretty free-spirited hippie parents, but I was. My mother was having a good time and decided to show everybody her boobs. Not something I need to be witness to, but I thought “It happens.”

OK, so I just told you about sitting across the aisle from a Maxim magazine cover girl on the plane right? I’m sitting on Bourbon Street drinking a Hurricane, trying to get the image out of my head of my mother, when it up walks this girl in a Catholic schoolgirl outfit. I mean perfect – I mean plaid miniskirt stockings, white shirt, no bra – perfect Catholic school girl outfit. It’s the girl on the plane and her two buddies, who are dressed like the Ghostbusters. I mean, perfect costumes – however, the proton packs dispensed alcohol. Pretty cool idea! If you know me, you know I’ve got some twisted fantasy about a girl and a Catholic schoolgirl outfit. I’m not a pedophile – that’s not what this is about.

Well, remember, I said my mother liked to party? She was drunk I mean drunk and she starts yelling at this girl, telling her how I think she’s hot and blah, blah, blah. I mean, my mom got slightly graphic – I guess that happens…

So this girl climbs on my lap and sucks on my neck in front of everybody, including my mother. Now, I know you are all thinking, “Bullshit, this never happened…you’re making it up.” Shut the fuck up; somewhere, with one of those three people, is a picture of this happening. This is before cell phones, before camera phones, they promised they would send us a copy of the photo because I figured none of you would believe this, but it never happened. I do have several people to back me up on this, so there you go.

I don’t remember much after that for that particular evening. We went bumping around the garden district the next day, which is very cool; if you haven’t done it, do so. Even got to see one of the houses from the Real World. That night, Josh and I ended up going down to Bourbon Street by ourselves and walking around. I had some girl walked up to me wearing a fishnet bodysuit – and nothing else – who proceeded to shove her tongue down my throat for two minutes. That was impressive.

So, as I’m sitting here telling the story…the best part of the whole trip, in my opinion, was the night before we left. Josh, I, and my sister’s boyfriend at the time, Mark, walked off Bourbon Street (probably looking for a place to smoke a joint) and we ended up on this street called Decatur. We ended up meeting these two hippie chicks who were just sitting there playing guitar and singing songs. I think we were out there till like four in the morning just hanging out with the locals.