Punch A Disabled Person In Madison –  Get A Felony… 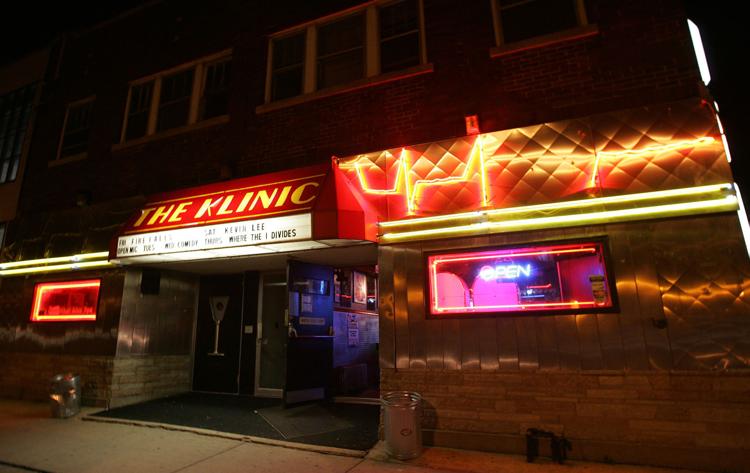 If you have listened to the show long enough, you will know the band, Flat Atom. They’re probably one of the best hardcore industrial bands I had the honor of working with and calling them family. (Best? Highly doubtful…Family? Yes, from the day we met. The Gimp WAS the 5th member of the band – editor [Thump])

There will be some of you that still remember a little bar called The Klinic on Park Street; there are plenty of stories about this place that I can tell. This place was our home – well, one of them – we did kind of go renegade and take over Madison’s rock venues. In the early days, whenever we would play there, I would run sound. The shows were epic; probably the most pure rock ‘n’ roll I have ever been witness to. Lots of crazy things would happen – people jumping on stage, epic mosh pits, people doing shots out of inflatable sheep assholes, spontaneous/casual nudity (oh, sooooo much nudity – ed.), etc.

One evening I was behind the board. The band finished their set, but still had time to kill, and if you know FA, they’re all amazing musicians, no matter what kind of music needs to happen. The drummer, we’ll just call him Fuckface (because that was his name) is quite an accomplished freestyle rapper. While I am packing up my gear, I let the PA just sit there, activated, so he decided to start rapping while the rest of the band improvised behind him. (We called it ‘Jazz Odyssey’ when we pulled that trick; either a deep catalog reach, or improvising ala Spinal Tap opening for a Puppet Show– ed.). At this time, a woman walked into the bar who was obviously on something (meth – she was on meth, which is why we called her ‘Meth Girl’ – ed.), so Fuckface started rapping about her.

I’m not paying a whole lot of attention, because I’m packing my gear. Next thing I know, this chick is standing in front of me and then there is a fist connecting with my face – twice!! Again, I didn’t put together what was going on onstage with some chick punching me in the face. I guess she figured that she couldn’t get on stage, so she would go after the guy controlling the stage.

Sitting there in a daze, I was like, “What the fuck  just happened?!?” Then I see Nick – let me explain… Nick’s not a small guy – and he’s coming off the stage at me at a dead run, followed by Thump (I needed 2 seconds to get my guitar off – ed.) I heard one of them say, “Wait a minute! You don’t fucking do that!!!”

Then, she was on the ground with Nick sitting on top of her. I’m still like, “What the fuck?” The cops were called, they show up, and the guys get off of her. She starts fighting with the cops, who proceed to punch her in the face several times to get her to calm down. After they get her cocked up, the cop comes up to me and says, “Do you wanna press charges?”

“I didn’t want to go to jail, and I didn’t think it was right to punch a woman.”

Quote from the cop, “I wouldn’t put you in jail; and if some chick wants to hit you, knock her the fuck out!”

Roger that! I found out, probably a month later, that she got charged with a felony because apparently disabled people are a protected group. OK, I guess.

Moral of the story: Don’t get in a bar fight with The Gimp – especially if he’s working his home club and Flat Atom is around…
(An abridged telling/reference to this story did appear in Flat Atom’s official EPK – The Gimp was legend with us – ed.)