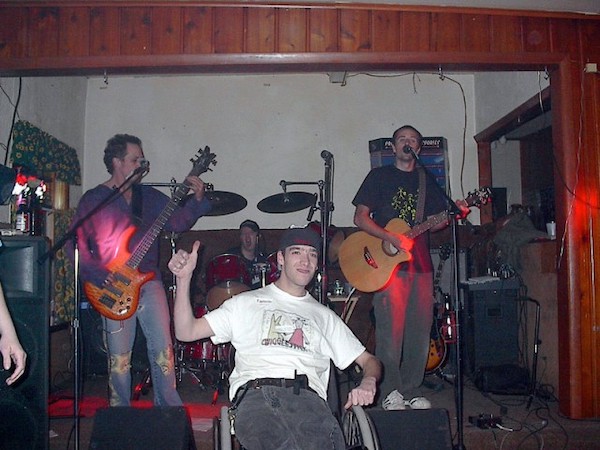 A couple of weeks ago Josh from Wigglestick posted a question to Facebook asking people to tell him why they liked the band so much. I thought since I play them a lot I would share my response with all of you.

OK brother I know you know some of this. But I’m kind of glad you had made this post because I’ve never really talked about it. In fact I’m not sure you really know the full story about how I ended up becoming a Wigglesticker for life. I figure I can share the story with all your friends. So I know you knew that I was a radio disc jockey in Madison Wisconsin, Still do the show today and still play wiggle stick on a pretty regular basis. Anyway back to the story when you’re a radio disc jockey you get a whole bunch of CDs on a pretty regular basis. And all CDs look the same so the rule was put something on your CD that will make it stand out and make the DJ play it. Bill sent me a copy of the first CD I believe it was called big ass hit at least that’s what I called it. There was a picture of a girls boobs on the actual CD. So of course you’re going to play the record with the boobs on it especially in your 20s. The first song big ass hit was all about getting high, at that point that’s all that mattered. i used to talk to bill during my show back then and one night I said I wanted to come see you guys play live. I didn’t mention to him that I was in a wheelchair, I didn’t even think of it. He drove to Madison and picked me up he’ll never say it but I think it kind of weirded him out that I was in a chair at first. We drove to Hudson. Sorry don’t remember the name of the bar. I didn’t know you guys at all any of you and you excepted me for me and didn’t even bat an eye at me being in a chair. You guys were one big family and I felt excepted. I and all of your originals spoke to exactly where I was  at that point. It took one crazy weekend two shows for me to feel like I was part of it. You guys were not just a cover band your originals were something new something that wasn’t being done. It makes me sad in a way the stuff you were doing wasn’t getting more recognition. I was at the same time aware we were all part of something very special. The next fall you guys released the album that sorry don’t remember the name but you put a picture of me on the cover. That album actually contained probably still my favorite song. Who am I. I wish I can put into words what that song did the first time I heard it. I’ve never been able to. The closest I can come is this is gonna sound really hippie which is an a bad thing. But it was like seeing the light. I have almost every track you guys ever recorded minus like two songs. I also don’t know if you remember but you guys you and Roger did an acoustic show at a beer bar again can’t remember where it was but you guys let me get up on stage and sing who am I with you, I still think about that a lot.